May 23, 2022 | When Valley High School junior Shreya Joshi noticed that Asian American and Pacific Islander (AAPI) history was often overlooked, she decided to take matters into her own hands. With help from her teachers and the Monsoon organization where she serves as a youth intern, Joshi produced six AAPI history videos in the style of educational YouTube channel “Crash Course.”

Joshi collaborated with Valley social studies teachers Ann Krois and Kevin Neal to write and edit the videos and narrated four of the six videos herself. Episodes two and four were narrated by Hla Paing, a fellow youth intern at Monsoon, which “serves victims/survivors of domestic violence, sexual assault and human trafficking in Asian and Pacific Islander (API) communities in Iowa.”

The videos were all posted to the Monsoon Violence Prevention Program YouTube channel in time for Asian/Pacific American Heritage Month (APAHM), which is observed each May. While APAHM is not the only time to explore AAPI history, it can be an intentional time to highlight, celebrate, and reflect on the history of AAPIs in the U.S. Joshi also presented to her Valley peers about AAPI heritage, history, and identity during classes and Encore this May.

“At the end of the day, history is what we choose to remember, the voices we want to hear,” Joshi says in episode 1. “But when there are voices we can’t (hear), it becomes our job to ask why.” 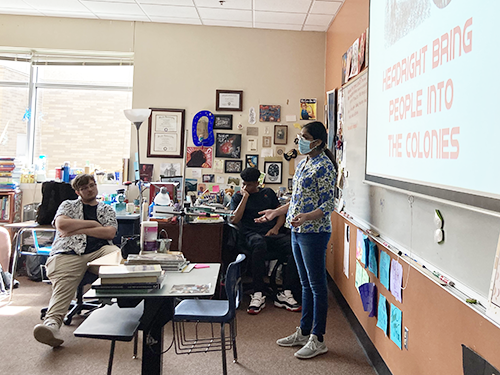 WDMCS recommends these videos for secondary students and older. Some videos contain images and descriptions of violence, trauma, and slurs related to the history of Asian Americans and Pacific Islanders in the United States.